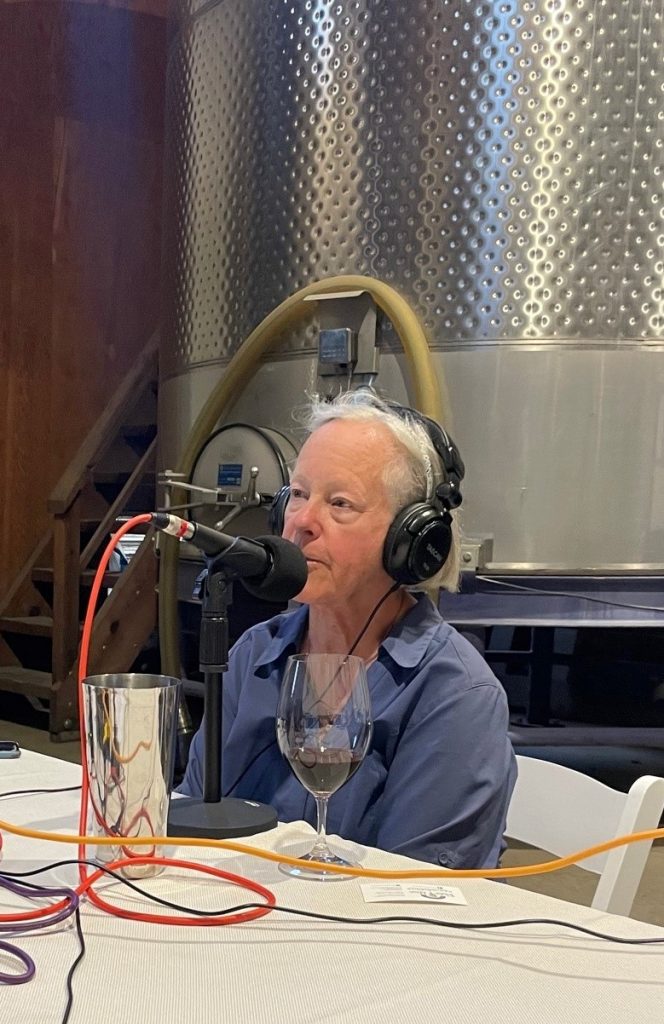 Cathy Corison arrived in Napa Valley a mere 48 hours after graduation from Pomona College. She’d taken a wine appreciation course at Pomona on a complete whim two years earlier and fell in love with wine for all the usual reasons. As a Biology major, her attention was drawn to the fact that wine is the result of a fascinating collaboration among a series of living systems.

More than 40 years later, the hosts felt honored to spend the recording session sitting in Cathy’s tank room (that sounds funny, doesn’t it?), admiring all she and husband William Martin (designer of the Corison Winery “barn” on the estate), had accomplished since the initial spark of interest decades earlier. While the tanks were empty, awaiting fall’s harvest when the winemaking cycle begins again, sitting at the table with Cathy hearing her stories provided a glimpse of both the past and the future.

Cathy Corison’s cabernet sauvignon has received more accolades and recognition over the decades than we could begin to touch on, including Cathy being named Winemaker of the Year by the San Francisco Chronicle in 2011. So what spurred Cathy’s quest for cabernet power and elegance in Napa Valley?

A master’s degree in Enology at U.C. Davis was essential from Cathy’s point of view, and then a harvest internship at Freemark Abbey in 1978. There was no holding her back, despite the fact that she tried to get hired as a winemaker at several wineries. (Owners would say she was too short and they believed she could not work in the wine cellar. She almost started working at Christian Brothers in the enology lab.) She showed them a thing or two! 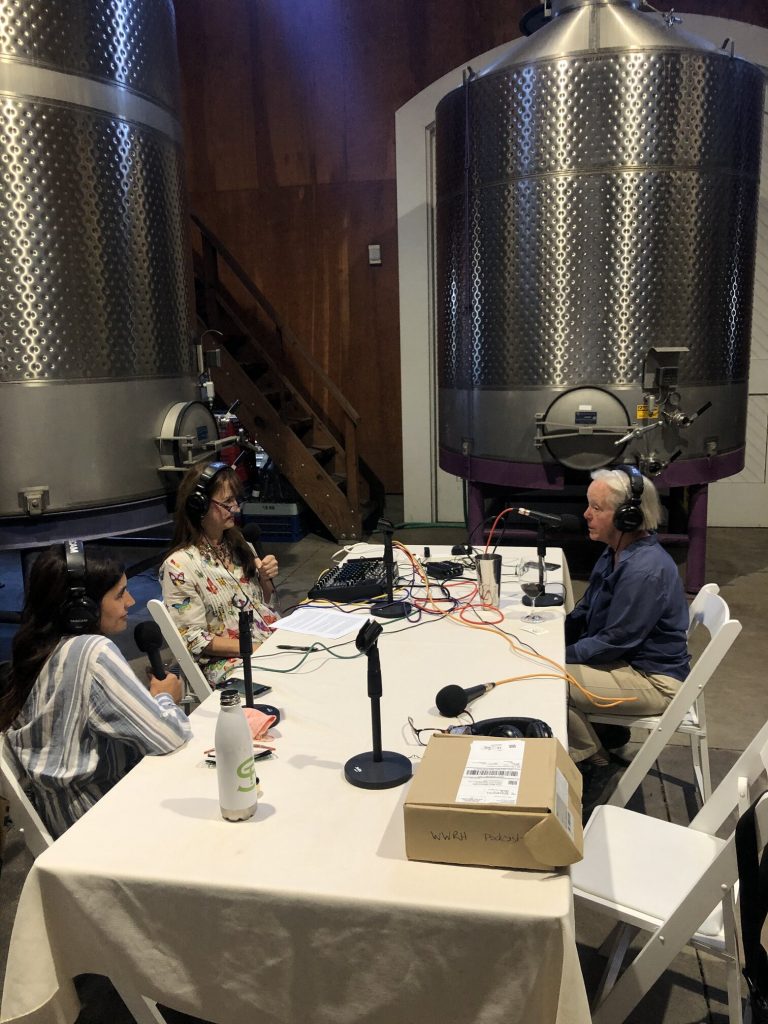 Eventually, her winemaking positions included Yverdon in 1979-1980 and then Chappellet Vineyard for the 1980’s. In 1987, toward the end of her tenure at Chappellet, there was a wine inside her that needed to get out and she began to buy grapes and barrels (instead of cars and houses). Using other wineries’ excess capacity while continuing to moonlight at Staglin, York Creek and Long Meadow Ranch, Corison Winery was born.

Cathy is headed into her 35th harvest at Corison Winery (with several more behind her at the wineries she worked at prior to founding her own). And the hosts were curious about current vineyard protocols given the drought and that Cathy has been farming her own estate vineyards for decades. (Tune in to learn what they’re doing to prep for this year’s harvest.)

Surrounding the winery “barn” on the valley floor is Kronos Vineyard, named for one of the Titans. The Titans were the deities in Greek mythology that preceded the Olympians. They were the children of the primordial deities Uranus (heaven) and Gaea (earth). That is right where wine sits for Cathy, between earth and sky. Located by William Martin and purchased in 1995, the vineyard is one of the last old Cabernet vineyards in the Napa Valley. Planted in 1971 on St. George rootstock, which is completely resistant to Phylloxera, the gnarly, wise old ladies are almost 50 years old!

Yields are pitifully low at 1.25 tons/acre, but the singular wine it produces proves it to be one of the great Cabernet vineyards of the world. Cathy considers it a gift to have the opportunity to work with these old vines because they yield concentrated, complex, inky, structured, aromatic wines at very moderate alcohols. Farmed sustainably from the beginning, these deep-rooted veterans sail through any weather. 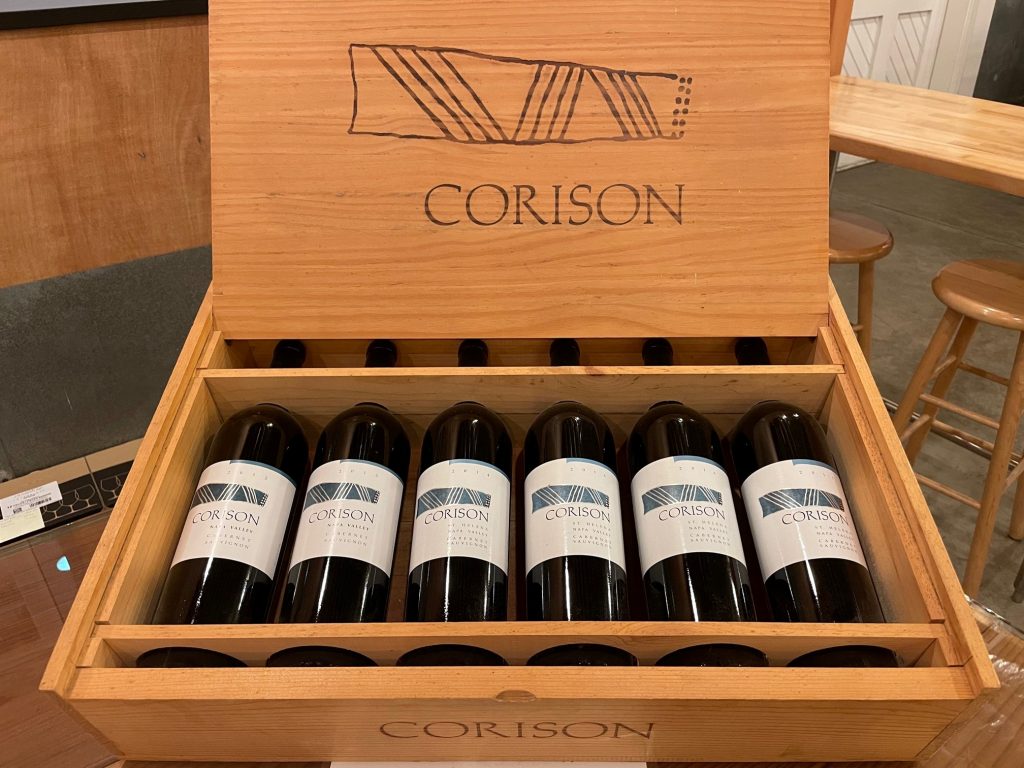 Their second vineyard, Sunbasket, is a more recent acquisition but has long been producing grapes for Cathy’s wine for over 25 years. Corison shared it with Shafer Vineyards for many years until it became an exclusively estate winery over 10 years ago. Since then, Corison has taken all the fruit. Cathy has long valued Sunbasket for its bright red and blue fruit and pretty aromatics. Serendipity, and William Martin’s hard work, allowed them to buy it in 2015, adding it to their estate. Both vineyards are now sustainably farmed, but the first thing they did was to convert Sunbasket to sustainable farming methods upon acquisition.

Sunbasket Vineyard was originally planted in the early 1950’s by the legendary winemaker, André Tchelistcheff. Affectionately known as the ‘Maestro’, he influenced generations of Napa Valley winemakers. The vineyard is situated in sunny Saint Helena on the classic alluvial gravelly loam soils that are known as the ‘bench’. Referring to the exceptional amount of sunshine in this corner of the world, André called it a “sunbasket”. It is truly a great vineyard and we’re proud to continue as stewards of its distinguished heritage. 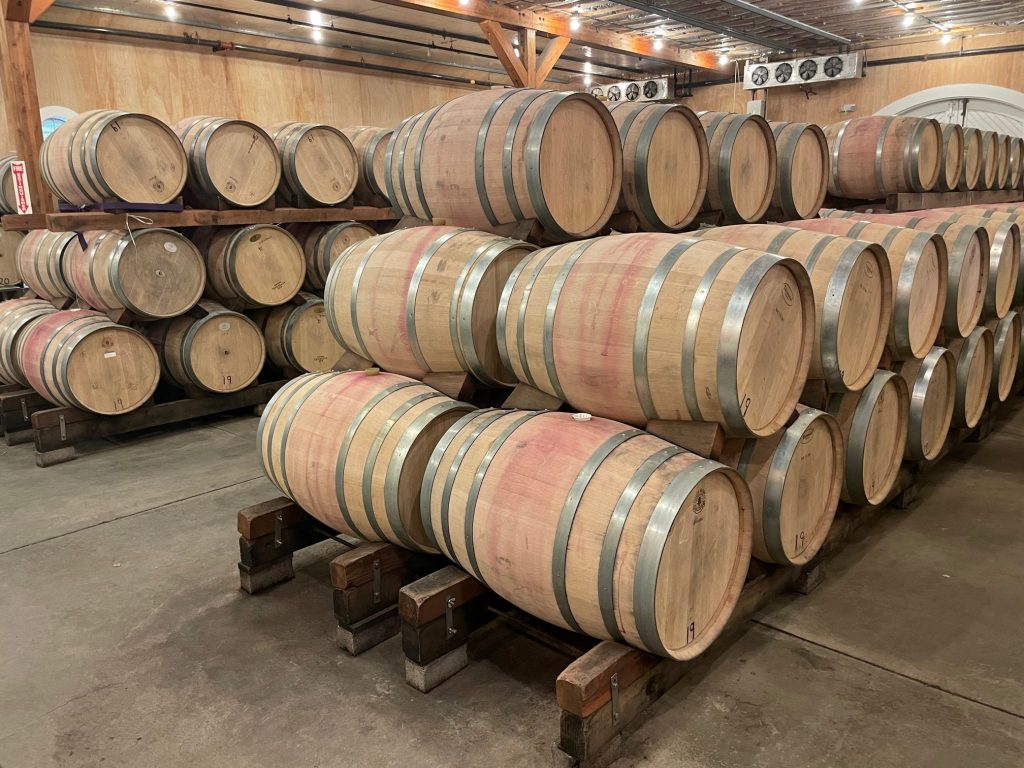 Tune in to hear about Cathy’s winemaking philosophy, expectations of the future for the winery, and the history of the unique trees that dot the property. We were enchanted!