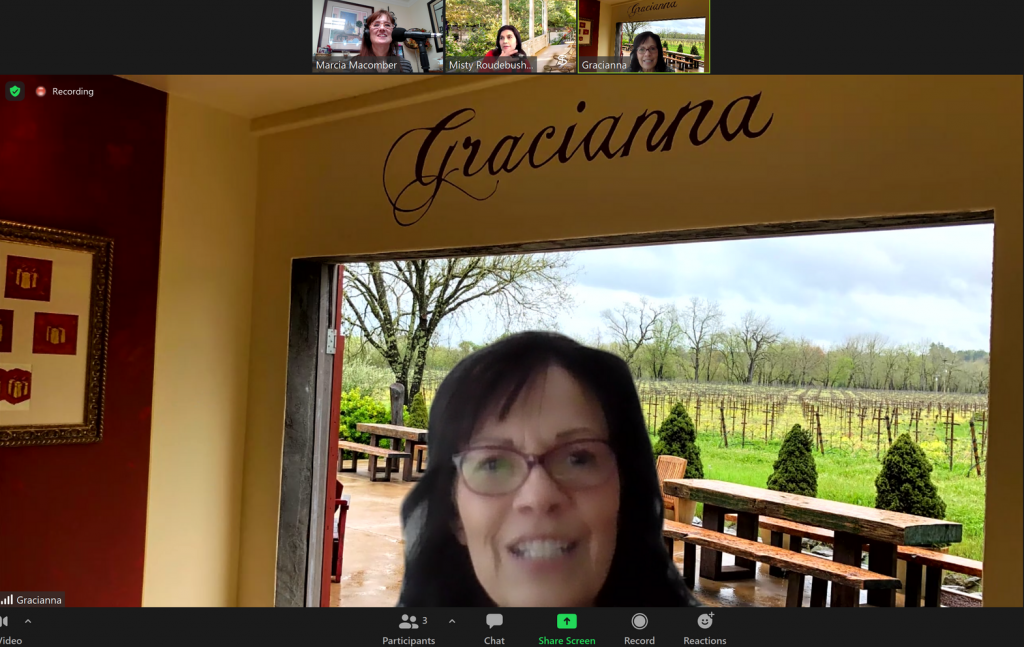 Cyndee Nelson had a lengthy career in radio production, which made us feel so lucky when she consented to be our wine news reporter on WWRH when we first began as a local radio show. She put together the most polished wine news reports, all the while serving as Gracianna Winery’s Wine Club & Hospitality Manager at their “Miracle Mile” Westside Road location in Healdsburg on the Russian River.

Eventually, the challenge of reporting wine news on live radio while simultaneously serving guests at Gracianna’s tasting room became a bit too much of a stretch, even for someone as talented as Cyndee.

While we sorely miss her weekly contribution to the show, we’ve had it in the back of our minds to visit Gracianna ever since this show began. At long last, we found an opportunity, as the pandemic began to recede in Northern California.

Gracianna Winery has been producing award-winning Pinot Noir, Zinfandel, Chardonnay and other varieties since 2009. Being an expert storyteller, Cyndee filled us in during show about the winery’s fascinating family history, beginning with the Amador Family’s maternal grandmother, Gracianna Lasaga, for whom the winery is named, as the story began decades earlier.

Born on the French side of the Basque Pyrenees, Gracianna emigrated to the United States as a young woman after World War II. The hardworking and beautiful Gracianna and her beloved husband John raised thousands of sheep in Santa Barbara County then settling in Santa Maria, California. She was a fervent believer in expressing gratitude for everything, thus providing a theme for the Amador family’s life work along the Russian River.

Fast forward several decades when a small plot of land became available along Westside Road’s “Miracle Mile.” Gracianna Winery is set in the midst of natural beauty. Its family-designed estate buildings and gardens, its storied history, and its reputation for classic award-winning Russian River wines reflect their craftsman approach.

Open by appointment for tastings, and having a robust and enviable wine club membership, nearly all their wine is sold directly to consumers.

During the show, Cyndee provided a mini-virtual tasting event as Misty and Marcia sampled the Gracianna 2019 Suzanne’s Blend Chardonnay and their 2019 Resilience Gracianna Pinot Noir, both offering a high level of complexity. As they do not fine or filter their wines, the hosts found layers upon layers of aromatic and flavor notes to discover. And it was a bit of a race to think of the many food dishes that would accompany these wines.

As their production is highly limited (often under 300 cases of each wine), we found ourselves being ever more grateful for the opportunity to taste them. They are racking up awards at high speed, having just picked up several major awards in 2020, including Sunset International Wine Competition’s Best in Show.

Living up to their slogan, these are wines “for those with something to be grateful for.”