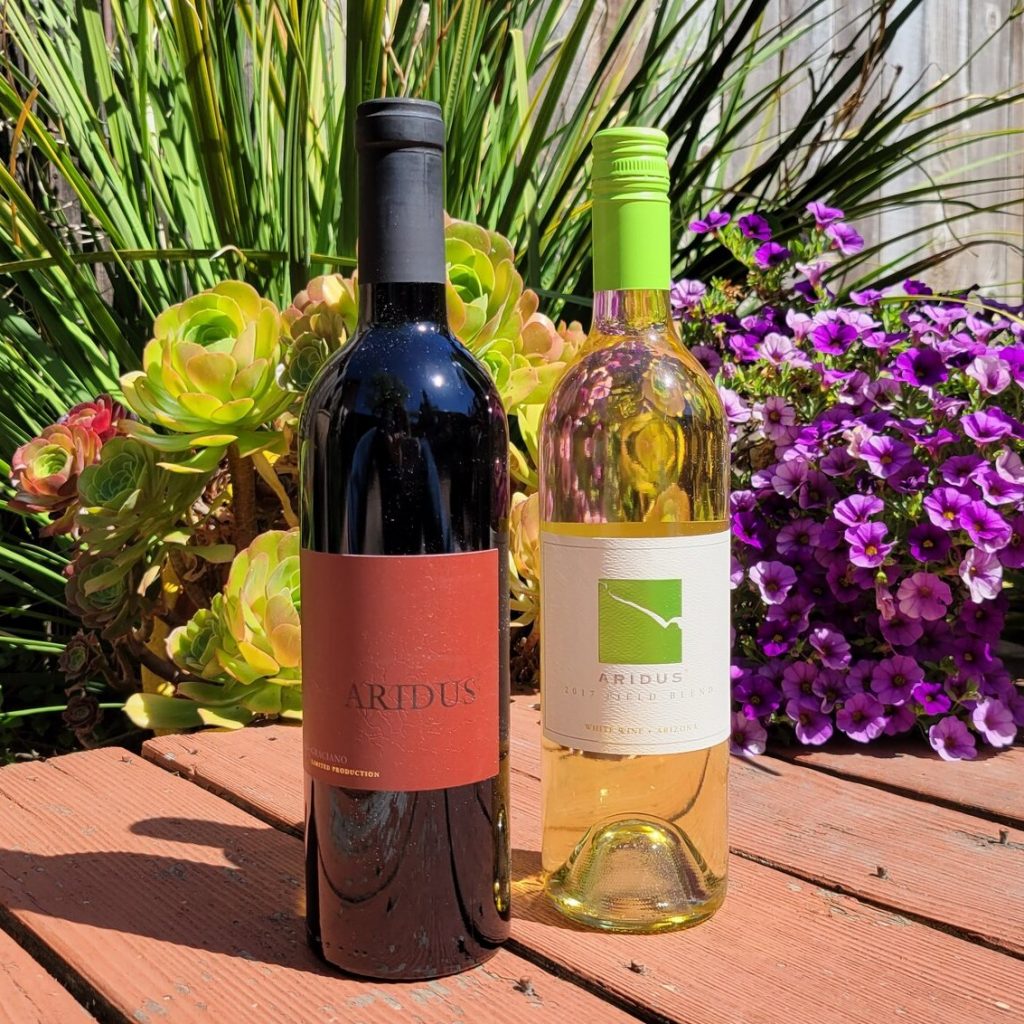 Lisa Strid is nearing her 5th year anniversary as the winemaker at Aridus Winery in Willcox, Arizona. Although she is a Wyoming native (with no vineyards anywhere near her home), she fell in love with wine while working alongside her uncle on his small vineyard and winery in western Washington. Play the show to learn about Aridus’ estate wines, grown above 5,000 feet in elevation in southeast Arizona.

We were fascinated to learn about the similarities and differences in growing conditions, harvesting and wine making in Arizona. (They get monsoon rains during harvest season!) To plant their vineyard, they had to use a jackhammer and auger, not exactly standard vineyard planting equipment here in Northern California!

Lisa Strid previously worked on the Specialty Winemaking team at E&J Gallo. After nearly two years she transitioned to the role of Research Winemaker, where she focused on innovative equipment use, new technology validation trials and the exploration of process-driven changes to target different wine styles.

Having an eye on desert wine growing while working at Gallo, she visited the area to find out how the quality of wines were developing in Arizona. When she saw the listing for the winemaking position at Aridus, she leaped at the opportunity.

At Aridus, Lisa directs not only the production of their wines but also is responsible for the winery’s custom crush operation, where growers bring their grapes from throughout Arizona, New Mexico, Colorado and California.

The renovated former apple warehouse, just outside the town of Willcox, is where she diversifies her winemaking expertise according to the variables of the desert terroir of the Southwest and beyond. Aridus produces more than a dozen wines, both white and reds.

While many of their wines’ grapes have been sourced from vineyards in the area and via relationships Lisa has personally established, she is also closely involved with the winery’s 40-acre estate vineyard in Pearce, Arizona. It lies along Turkey Creek, perched at 5,200 foot elevation, which is currently planted both to white and red wine varietals.

Aridus, which derives its name from the Latin word meaning dry or arid, pronounced air-i-dus, was founded by Scott and Joan Dahmer in 2012 and today the winery has two tasting rooms, one near the winery in Willcox, Arizona, and the other in old town Scottsdale, Arizona.

During the show we sampled Aridus’ inaugural vintage of their white blend: 2017 Aridus Field Blend, made from Sauvignon Blanc, Malvasia Bianca and Viognier, clocking in at an astonishingly low 11% ABV (very impressive). This refreshing white blend makes an easy quaffer. It’s elegant, with crisp acidity that will maintain the wine’s structure for some time. Lots of citrus notes but also tropical aromas.

Each of the hosts also received various Aridus red wines to sample, including the 2018 Graciano, which had lots of dark fruit flavors, from dark cherry, to blackberry, plum and more. Its strong acidity will ensure lengthy aging. This is a BIG wine. Misty was enjoying the Aridus 2018 Syrah, and Lisa tasted the Aridus 2018 Mourvedre. Both loved their richness and unique characteristics. These are well-structured wines, with loads of flavor to pair with a wide variety of food dishes.

Listen to the show to learn about this up and coming wine region, Aridus’ elegant desert wines and Lisa Strid’s journey to leading the winemaking efforts in this newer U.S. wine region.