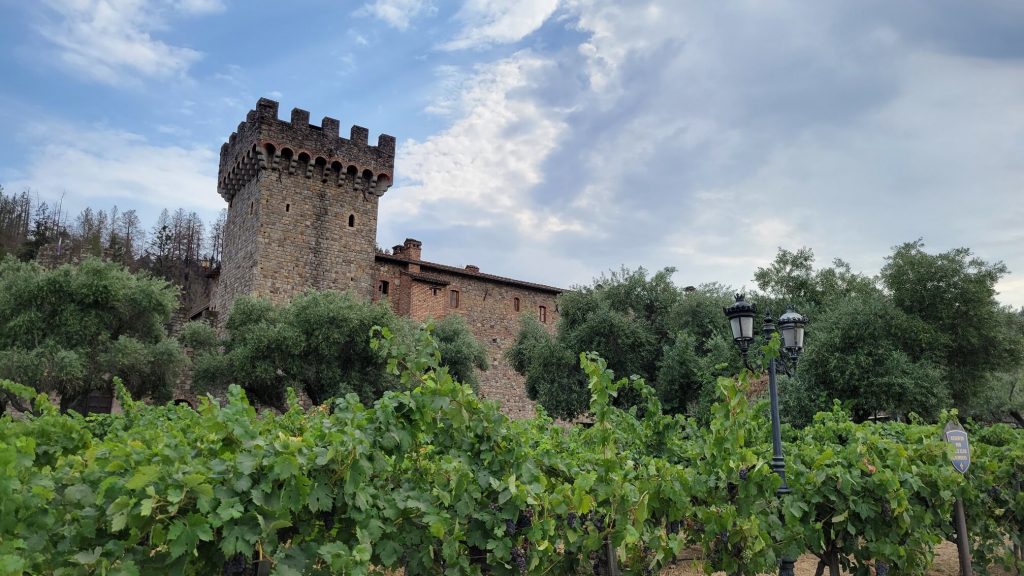 Little did Shelby Green know at the time, but her grandfather’s affinity decades ago for V. Sattui wines would play a major role in her life. The assistant winemaker at Castello di Amorosa and V. Sattui Winery began her career in wine at Ferrari Carano in Sonoma County. But she was attracted to the breadth and depth of the V. Sattui and Castello portfolio of wines and joined the winemaking team back in 2017 in enology. 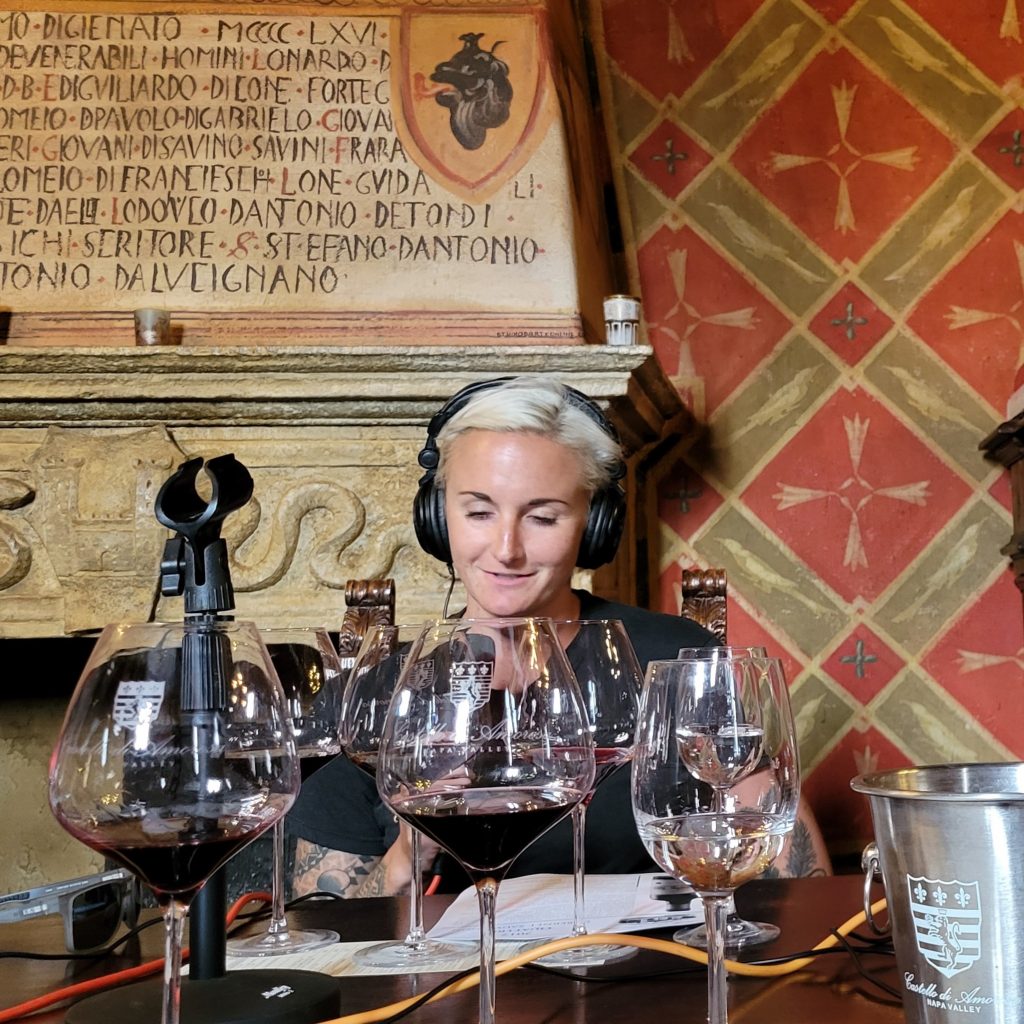 She hadn’t anticipated going into the wine business, but she was intrigued when her sister joined the wine business. She’d actually begun her career as a baker, with a strong interest in a food technology career.

Those forays north from Central California with her grandfather and family to visit and enjoy V. Sattui wines had stuck firmly in her memory banks. And she loved the wines, particularly Pinot Noir and Merlot.

Serving as the first woman winemaker on the Castello di Amorosa winemaking team, Shelby undoubtedly had picked up some unique insights which the hosts wanted to uncover. We had the good fortune to enjoy the ambiance of the Royal Apartment in the Castello while recording the show. Surrounded by hand-carved and hand-painted trestle roofing timbers, ancient brickwork and heavy, medieval décor, the hosts sat down with Shelby Green to taste through several Castello Italian red wines.

First up was the 2019 Terra De Promisio Pinot Noir: With a beautiful, deep ruby color and perfumed nose of black cherry and plums, 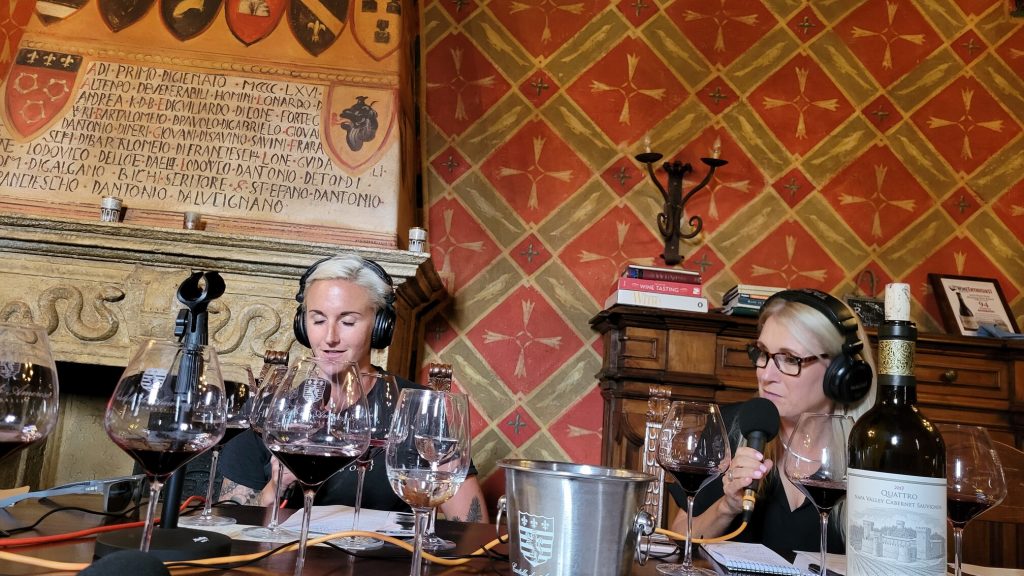 this wine showed an elegant, balanced, classic Pinot Noir flavor profile. Wonderfully drinkable now, with its zippy acidity and structure, it can clearly age several more years and evolve enchantingly. Misty noted its origins from “The Land of Promise” family-owned vineyard near the city of Petaluma, an area widely-regarded for its premium pinots. The wind and fog blasting through the Petaluma Gap seem like a magical enhancement to pinots.

Then we moved on to the well-rounded 2016 Napa Valley Merlot. Sourced from select Napa Valley vineyards, including their own estate vineyard that surrounds the Castello in the foothills of the Diamond Mountain District, 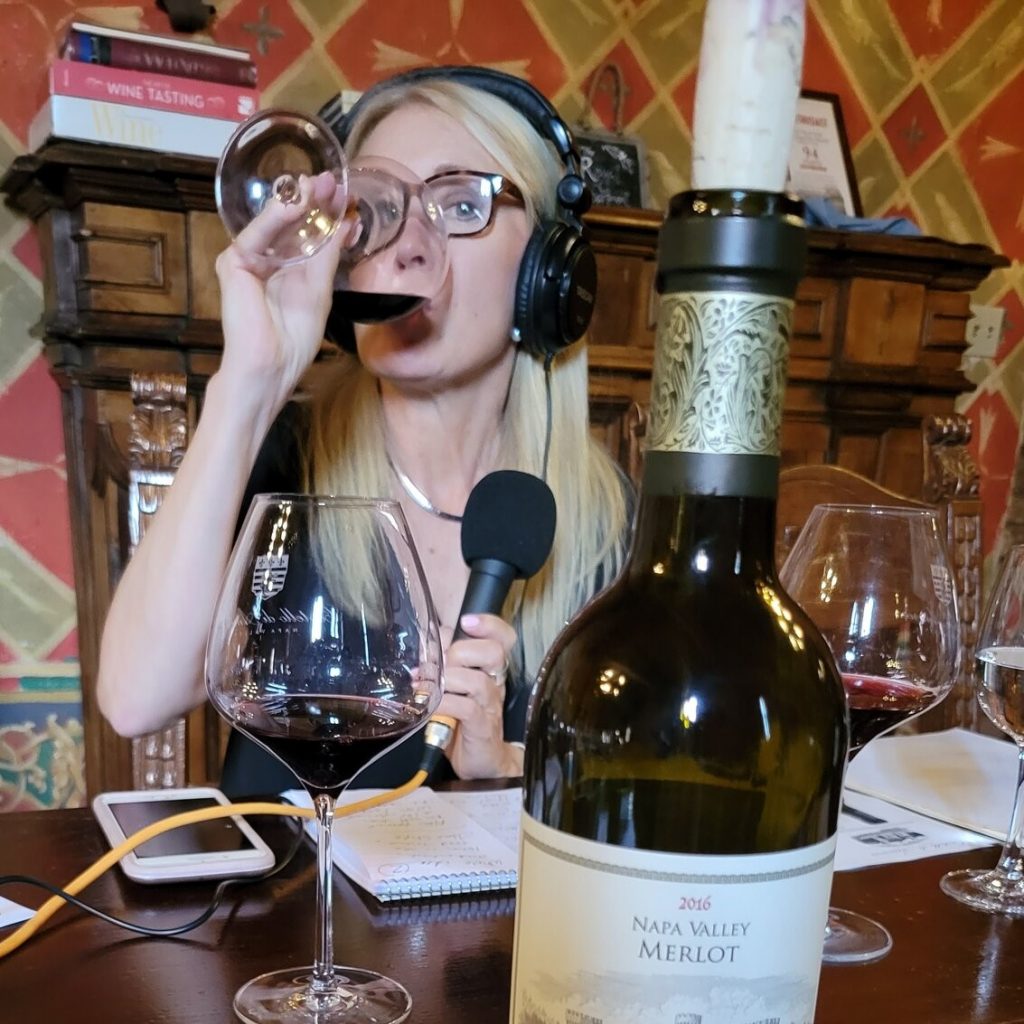 this Merlot opened with classic aromas of blue and black fruit: Shelby noted blackberry and blueberry along with notes of chocolate and cedar and baking spices. None of this was a surprise given its somewhat opaque, dark ruby color in the glass. One of Shelby’s favorite features of the wine was its ability to show off the beauty of Napa Merlot fruit.

For those unfamiliar with the Castello and V. Sattui Winery, both are the brain-child of owner Dario Sattui. He resurrected the family winery, V. Sattui, in 1975 after its shuttering at the beginning of Prohibition. After its successful growth, he spent years studying the architecture, building techniques and décor of medieval Italian castles, monasteries and buildings. In 1993, construction began on the Castello using old-world techniques.

This is no Disney theme-park castle, with fake stonework and facades. Builders and artisans, steeped in ancient techniques, were brought over from Europe to build the authentic 13th century Tuscan castle and winery. What was anticipated to be a six-year and 8,500 square foot construction project became a fifteen-year build, 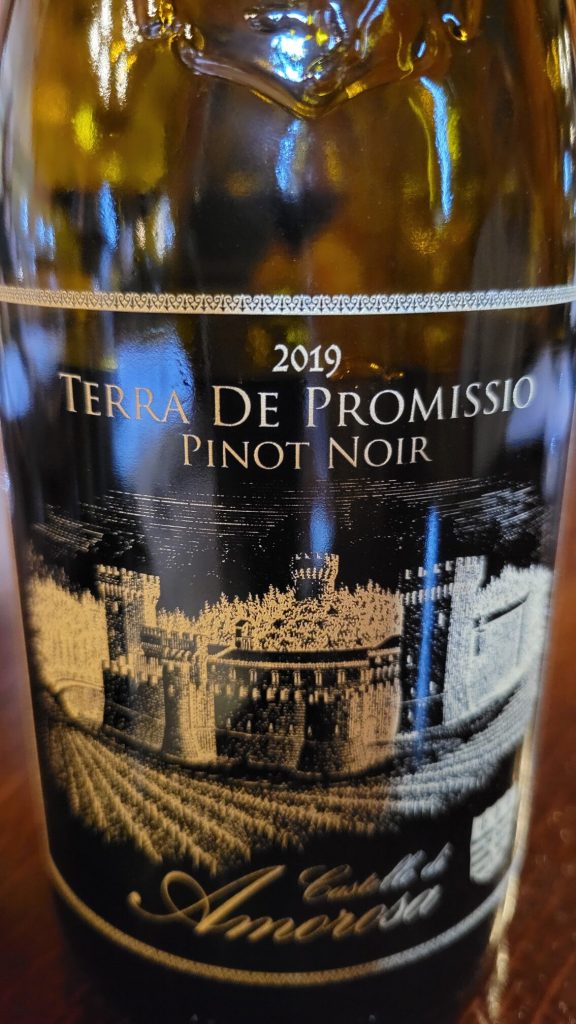 spanning four stories above and below ground extending to 136,000 square feet, including a moat, drawbridge, dungeon, consecrated chapel and spectacular vaulted barrel room.

Tune in to hear Shelby’s stories about enjoying the features of the Castello’s working winery, which include gravity flow production and modern pipes run right through the ancient stonework. She took us through the final tasting of the 2017 Quattro Cabernet Sauvignon. We thought it was such a fitting end to our experience since the wine showcased four different vineyards’ cabernet, Napa Valley’s signature grape variety. It was lush, expressing the classic notes of cabernet: black fruit, strong tannins and acidity with notes of caramel.

You’ll have to listen in for the rest of the story. It was fascinating to hear how Shelby zings back ‘n’ forth between the castle and V. Sattui (only a short distance south on Hwy. 29) for her winemaking duties. She seemed genuinely delighted that her family history with V. Sattui has come full circle with her making wines now at the winery her grandfather so loves. And she’s been fascinated by the learning experiences she’s gained at both wineries, with so many different vineyards and varieties to work with.

Wines are available only direct-to-consumer at V. Sattui or the Castello. Wine tasting experiences abound, from simple tastings to guided castle tours, food and wine pairings in the Royal Apartment, and wine and cheese pairing tours as well. Club memberships are also numerous, ranging from all-whites to all-reds, or sweet or dry wines, large format only and options for shipping or onsite purchasing.

With so many options to choose from, you can count on the Castello to put down their drawbridge for you!